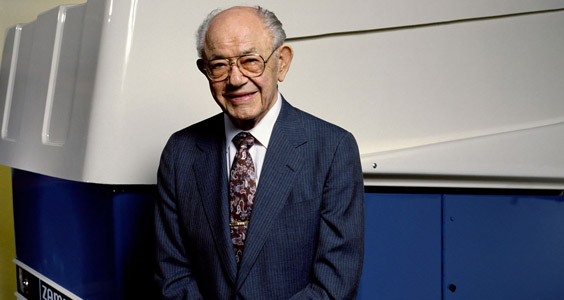 If necessity is the mother of invention, Frank J. Zamboni might be considered its father. This tireless inventor/entrepreneur never came across an obstacle he couldn’t tinker his way around.

Frank J. Zamboni was born on January 16, 1901 in Eureka, Utah. Frank’s parents moved their family (with one year old Frank in tow) from Eureka to a farm in Idaho, where Frank developed his mechanical skills. For more information about the Zamboni family history, see “The Man Behind the Machine”.

In 1920, Frank moved to Southern California with his brother Lawrence to join their older brother George in his auto repair business. After a short time tinkering on cars, the two younger Zambonis decided to open an electrical service business catering to the local dairy industry. The brothers installed many refrigerator units dairies used to keep their milk cool.

When the demand for cooling expanded into the produce industry, the brothers expanded their business vision, as well: they built a plant that made the block ice wholesalers used to pack their product that was transported by rail across the country. But as refrigeration technology improved, demand for block ice began to shrink, and Frank and Lawrence started looking for other ways to capitalize on their expertise with ice.

That opportunity came in the sport of ice skating. Popularity of the sport was growing, but there were few rinks in Southern California, so in 1939 Frank, Lawrence, and a cousin built Iceland Skating Rink in Paramount. The rink still operates today just blocks from the Zamboni factory. In fact, it’s not unusual to see Zamboni ice resurfacers driving down the neighborhood streets on their way to be tested at Iceland.