In addition to the efforts by the Zamboni Company to restore vintage machines for our own collection, we’ve received photos and stories from people around the world who have worked to accurately restore their historical Zamboni machines. Following are photos of some of the many machine restorations worldwide. Built and used at the Paramount Iceland Skating Rink, had four-wheel drive and four-wheel steering on a hand-built chassis using war surplus axles and engine. A cover at the front over the conveyor chain kept snow from falling onto the fresh ice surface. Its wooden side was hinged so snow could be shoveled out or melted by overhead sprayers. The Model A introduced the “wash water” system, which washed the ice with recirculating water before applying the final coat of water. Frank applied for a patent on the machine and in 1953 was granted Patent No. 2,642,679. 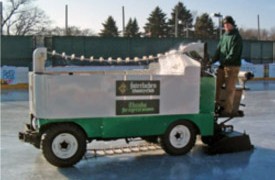 Steve Gilles behind the wheel of the Interlachen Country Club’s restored paddle and chain machine in Minneapolis, MN. 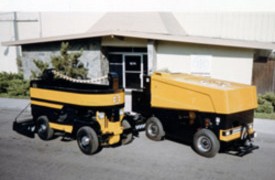 Model E No. 21 post-restoration and its replacement prepare for shipment to Boston and the NHL Boston Bruins. 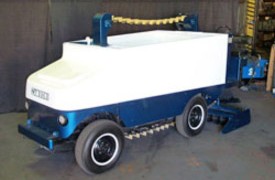 A Zamboni Company restoration of a Model K No. 757 with the vintage paddle and chain technology.

Read about the Bowdoin College machine No. 43’s restoration. 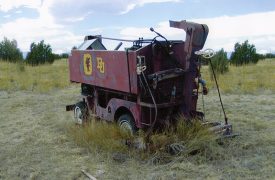 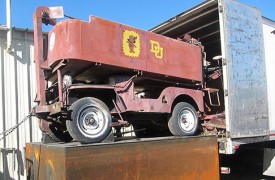 In 1949, Frank Zamboni completed his Model A, a machine with which one person could resurface a rink in a fraction of the time it took several people using existing equipment. Between 1950 and 1954 he produced twelve resurfacers with each one an improvement over the previous unit. Later they were grouped into classes because of some similarities but each Model B, C, and D was truly “one of a kind”. 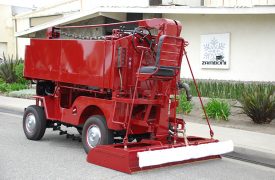 Denver University purchased the Model C for its ice arena in 1953. The 11th resurfacer sold by Frank Zamboni, Model C11 was built on a CJ-3B Jeep® and was painted with the school’s colors, eventually being decorated with the mascot seen in the first photo: Denver Boone, which was designed by Walt Disney. C11 served the University for many years before being sold to a private collector in Colorado in the early 1990’s. 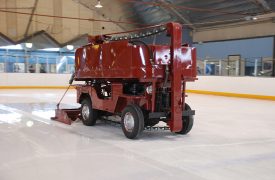 In the years prior to its acquisition by the Zamboni Company in 2011, C11 was stored in a field in the Denver area. Following shipment back to Paramount, California it was fully restored and brought back to its original working order. This machine, No. 34 is one of the twenty-one Model E resurfacers Frank Zamboni built between 1954-1955, the first units of one standardized design. The Model E resurfacers were built on top of a Jeep® chassis. Some of the machines were actually driven to their future homes by Frank Zamboni either as a complete machine, or with the Jeep towing a trailer filled with the Zamboni machine’s future components.

In November of 1955, this machine was shipped to its first owner, the Tower Cabana Skating Rink in Chicago, IL. Seven years later, the machine was sold to the Ice Chalet in Knoxville, TN, which opened October 5th, 1962. Zamboni E34 served this facility until 1985, when it was sold to the Village of Baraga, MI. After several years of usage, the machine was then “on the road” again. Its next stop was the North Lakeland Skating Association in Woodruff, WI.

From time to time, the Zamboni Company receives letters and photos of some of their “vintage” products, but the unique story of this machines travels were intriguing. In November of 1998, the machine (which was still in service) was obtained by the Zamboni Company with plans for a full restoration. The machine is now fully operational and has been brought back to its original 1955 colors and specifications.

With over four decades of service and 5,700 miles of travel, Zamboni E34’s record of staying power and durability pays tribute to the legendary quality of the Zamboni brand. 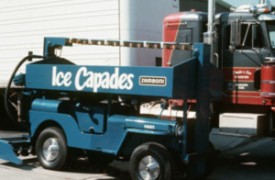 This machine Model B, No. 4 was involved in a fire (see image to the right) and was sent back to the Zamboni Company to be restored. It currently resides in the US Hockey Hall of Fame. 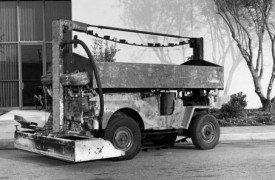 Read more about the restoration of Model B4 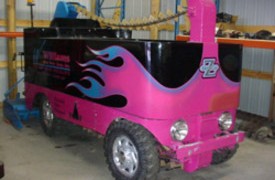 A Zamboni Company Authorized Distributor completed a spectacular restoration of a 1956 Model F, No. 37 which was the first Model F and the first machine sold into Minnesota. 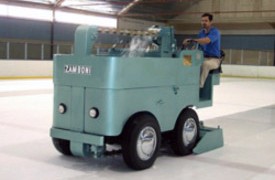 A Zamboni Company restoration of the smaller studio-rink designed Model JR No. 546 takes to the ice at Paramount Iceland. 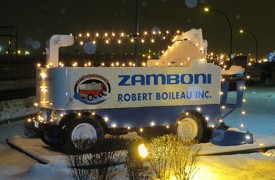 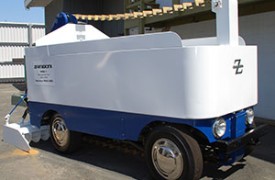 This photo shows Model FH No. 245 after its complete restoration.