The Zamboni® ice resurfacing machine was not the only machine built by the Zamboni Company. Frank Zamboni actually developed the “Grasshopper” (a machine to roll up artificial turf); the “Astro Zamboni” (designed for Monsanto Chemical Company to vacuum water from their Astro-turf® product); and the “Striper” (a machine to remove paint stripes from Astro-Turf® so a stadium could change the stripe layouts from one sport to another, such as from baseball to football).

Long-known for its efficiency in the areas of ice-resurfacing, Frank J. Zamboni & Co., Inc., was approached in 1970 by members of the Monsanto Company’s Astro-Turf® division to solve another type of arena-maintenance problem. The Astro-Turf people, headquartered in St. Louis, were quite familiar with the Zamboni ice resurfacer as it was being used in various arenas in the St. Louis area and they approached the Zamboni Company to see if they could modify an ice resurfacer to remove rainwater from their artificial turf in outdoor stadiums. 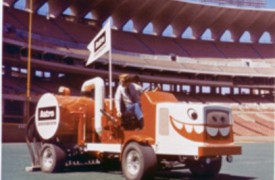 Due to rain, professional baseball games were frequently postponed or often required rescheduling at a later date if the field was unplayable. The Astro-Turf officials saw a definite need for a machine to address this issue. The Zamboni Company accepted the challenge and proceeded to study the problem. Because of the ice resurfacer’s weight and other restrictions, an entire new machine was designed, tested, and sold to Monsanto for their Astro-Turf customers.

This machine became known as the “Astro-Zamboni” and is designed to remove at least 75% of the water from the playing surface in 45 minutes or less. The heart of the machine is a blower that pulls a vacuum of up to 10 inches in a large cylindrical tank. The tank is, in turn, connected by a series of hoses to a patented water pickup head, which vacuums the water from the grass-like surface. 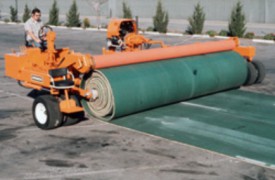 The “Grasshopper” turf-roller performs the job of rolling and unrolling the turf quickly so large arenas can change their floor operations from concrete to artificial grass playing fields in a matter of a few hours. The Zamboni Company designed this machine so that it is compact and highly maneuverable. The first Grasshopper was delivered to the New Orleans Superdome in 1975 and was in use for years along with a second Grasshopper that was purchased later. These two machines allowed the Superdome operations personnel to do the changeover job in about half the usual time. Grasshoppers have been used around the country in convertible Astro-Turf fields, including the Seattle Kingdome, the Georgia Dome and the Pontiac Silverdome.

CBS television went behind the scenes in Seattle and used time-lapse photography to show the incredible transformation of the Kingdome Stadium in Seattle, Washington, from football to basketball – in only nine minutes! The transformation, which usually takes 8 to 10 hours to accomplish, was filmed to illustrate at high speed the stadium conversion process. The Kingdome had four major league tenants at the time and the operations crew, with the help of the Grasshopper, needed to have each conversion down to a science in order to accommodate their 240 event-days that the Kingdome averaged annually. 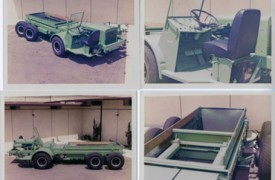 Under Frank’s direction, the Company also built and/or sold machines for many other purposes, including the “Black Widow” (which was used to fill in dirt on top of cemetary vaults); the “Vault Carrier” (built to lift and carry heavy cement burial vaults) as well as units designed to groom snow, dig trenches and clean aircraft. However, through the years, the Zamboni Company’s primary focus has been on the ice business and the continued evolution of the Zamboni ice resurfacing machine.