Between 1928 and 1978, Frank Zamboni was awarded a total of 15 patents ranging from refrigeration innovation to ice resurfacing machines as well as patents for his non-resurfacing machines. Here are just a few patent drawings and stories about Frank’s patent history over those 50 years, including a list of all of his patents. 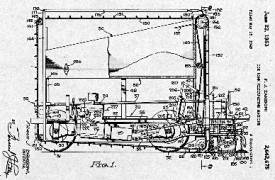 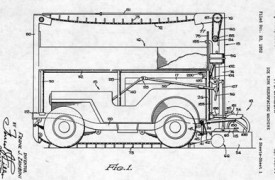 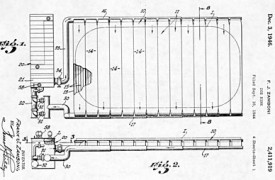 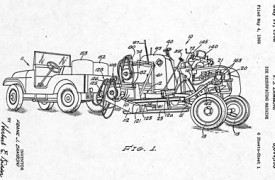 After about a decade of experimentation, Frank Zamboni was almost ready to introduce his machine to the world. The Model A ice resurfacing machine, built and used at the Paramount Iceland Skating Rink, had four-wheel drive and four-wheel steering on a hand-built chassis using a war surplus engine and axles.  The four-wheel steering feature was dismantled after usage showed that it created a “jamming” effect when trying to steer away from the boards. A cover was added at the front over the conveyor chain to keep snow from falling onto the fresh ice surface. Its wooden side was hinged so snow could be shoveled out or melted by overhead sprayers. The Model A introduced the “wash water” system, which washed the ice with recirculating water before applying the final coat of water.

In 1949, Frank applied for a patent on the machine and in 1953, Patent Application No. 93,478 was granted by the United States Patent and Trademark Office. Patent No. 2,642,679 was Frank’s basic and broadest patent, although it was not his first. This resurfacer was used at Iceland for about four years before it was replaced by a newer, more efficient model, as Frank’s innovative spirit resulted in continued improvements to the products he was building.

In 1924 Frank invented an adjustable electrical resister and obtained U.S. Patent No. 1,655,034 on January 3, 1928. During the next three years he obtained two more U.S. patents. On May 16, 1949, he applied for a U.S. patent for the world’s first self propelled ice resurfacing machine, the Model A. Later in the year, he established Frank J. Zamboni & Co. as a family partnership to manufacture his machine starting with an improved Model B. 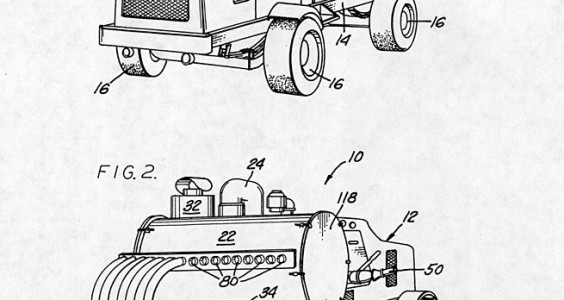 Frank was approached by the Monsanto Chemical Co. As the manufacturer of AstroTurf®, the company had a problem with their product: rain tended to stay on top of the artificial grass and would not soak through into the ground underneath.

Frank tackled the problem and invented the Astro Zamboni® Machine for which he obtained two U.S. patents in 1973 and 1974. This machine has been credited with saving several World Series baseball games from being rained out.

Monsanto was so impressed with the Astro Zamboni® Machine that the company came back to him to solve another problem: it was hard to remove paint from the AstroTurf® after it had been applied to mark stripes for different sports. Once again, Frank came up with an ingenuous machine which used rotary brushes to scrub the turf and then blasted a high pressure spray of water to wash away the loosened paint. For this invention, he obtained U.S. Patent No. 4,069,540 on January 24, 1978.

On April 18, 1978, he was granted U.S. Patent No. 4,084,763 on his “Grasshopper” which rolled up and laid down the artificial turf on sports playing fields in domed stadiums.