Iceland opened in 1940 as one of the largest rinks in the country, with 20,000 sq. ft. of iced surface — that’s enough room for 800 skaters. The original rink was an open-air facility. But the brothers soon learned that, with the intense Southern California sun and dry desert winds, the quality of their ice sheet was less than adequate, so they covered it with a domed roof. The challenge now was to maintain this much-improved indoor surface. More about Paramount Iceland. 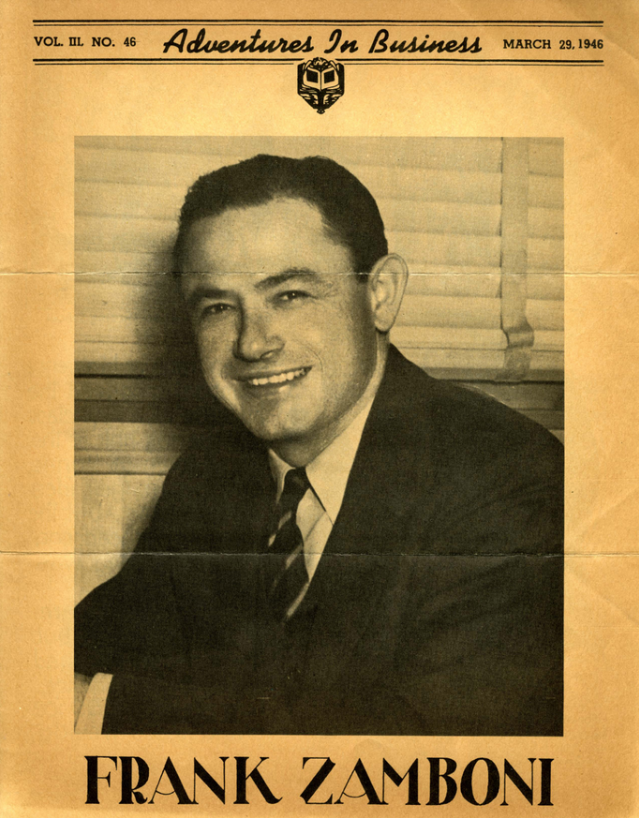 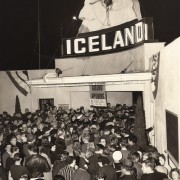 At the time, resurfacing the ice meant pulling a scraper behind a tractor, shaving the surface. Three or four workers would scoop away the shavings, spray the surface with water and squeegee the dirty water away. This was followed by applying more water that would be allowed to freeze — a process that took more than an hour. For Frank, it was a puzzle to be solved: how could he make a good sheet of ice in a short period of time? It wasn’t long before he attempted to develop a machine that would make the task of ice-resurfacing fast and efficient. And the concept of the Zamboni ice resurfacer was born…

In March of 1942, Frank bought a tractor and started experimenting. His first attempt — a machine built into a sled towed behind a tractor — neither smoothed the surface nor picked up the “snow” adequately. Repeated experiments with the design proved fruitless. But Frank had another idea, and in 1947 he began tinkering with a completely different approach: a machine that would shave the ice, remove the shavings, wash and squeegee the ice, and hold snow in an elevated tank large enough to last for an entire resurfacing job. 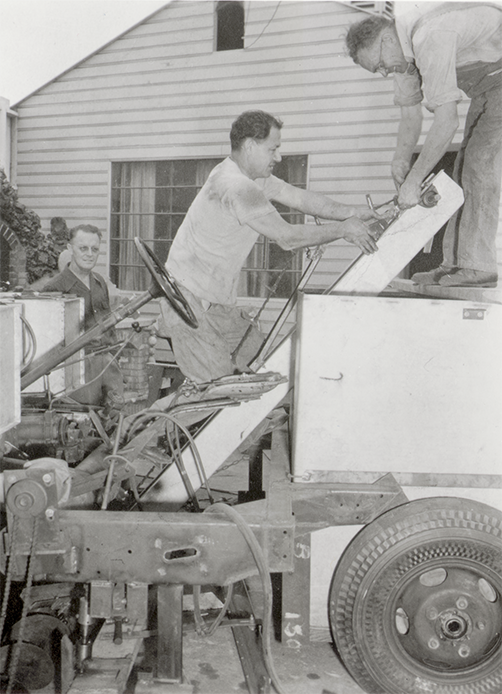 This prototype was built at the rear of Iceland skating rink in Paramount, California. The machine had water tanks in the front and a snow tank at the rear. Only the front wheels were powered and for this he used a front steering axle from a war surplus truck. The unit was powered by a Jeep engine and transmission that were also purchased from war surplus. On this chassis, he tried different conveyor systems including the paddle and chain that is shown in the above photograph. He abandoned experimental prototype No. 3 in late 1947 as unsuccessful, because the blade chattered, the snow tank did not carry enough snow and he found that it was not possible to get traction on the ice with the two-wheel drive machine even when equipped with tire chains.

To overcome the inadequacies he encountered on experimental Model No. 3, Frank decided to develop a completely new design. For this machine, he purchased another surplus front steering truck axle so he would have both four-wheel drive and four-wheel steering. In addition, parts from the previous prototype were used in building the new machine. The new machine’s adjustable blade could be held firmly in place by the operator, thus keeping it from chattering or digging into the ice.

By the summer of 1949 he was able to get a good sheet of ice consistently, and the “Model A Zamboni Ice Resurfacer” became a working reality. Frank applied for a patent and in 1953, Patent Application No. 93,478 was granted by the United States Patent and Trademark Office.